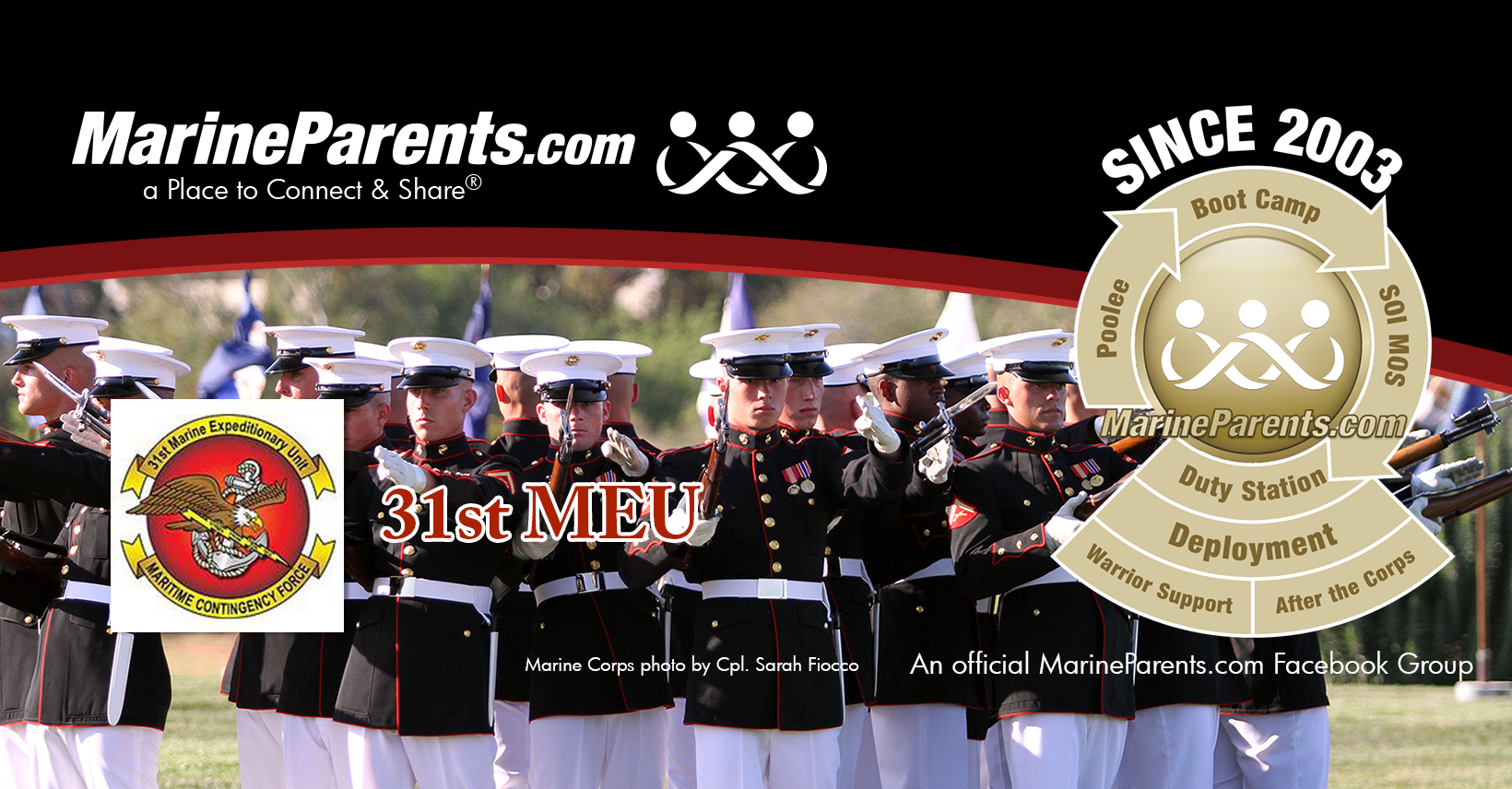 Welcome to the Official MarineParents.com page for 31st MEU.

Since World War II, in nearly every crisis in which the United States has deployed projection forces, the first military units in position to move ashore with sufficient sustainability for prolonged operations, have been from one of America's Fleet Marine Forces. These forces have been organized into Marine Air Ground Task Forces (MAGTF), a combination of air, ground and support assets.

MAGTFs are established for specific missions, or in anticipation of a wide range of possible missions. Combining air, ground, and logistics assets maximizes the combat power of each of the war-fighting elements. Tailoring of MAGTFs is based on detailed analysis of specific situations as well as historical data which has been compiled by Marine Corps planners over the past several decades.

MAGTFs have long provided the United States with a broad spectrum of response options when U.S. and allied interests have been threatened and in non-combat situations which require instant response to crisis. Selective, timely and credible commitment of air-ground units have, on many occasions, helped bring stability to a region and sent signals world-wide to aggressors that the United States is not only willing to defend its interests, but able to do so with a significantly powerful force of extremely short notice.

The Marine Expeditionary Unit (MEU) is the smallest of the MAGTFs. Together, with its Navy brethren they serve as the Nation's forward deployed, quick response team, capable of accomplishing numerous missions around the globe.

The MEU, Commanded by a Marine Colonel, is comprised of approximately 2,200 Marines and Sailors embarked aboard three or four amphibious ships. These ships are manned by another 2100-2300 Marines / Sailors and as a group are designated as an Amphibious Squadron (PHIBRON) commanded by a senior Navy Captain, who bears the title of Commodore. Joined together, the MEU and PHIBRON are designated as an Amphibious Ready Group (ARG).

The 31st MEU, working with PHIBRON 11 and the USS Bonhomme Richard ARG, comprise one such Navy/Marine team. The 31st MEU and PHIBRON 11 are the only Forward Deployed Naval Force (FDNF) in the Asia-Pacific region.

The GCE for the MEU is the BLT. Based on an infantry battalion, the BLT is reinforced with artillery, assault amphibian vehicles, combat engineers, an anti-armor section and light armored vehicles. The mixture and number of pieces of such types of equipment are tailored to the mission, or anticipated missions, of the deploying MEU, and may be influenced by mode of transport.

The ACE provides rotary and fixed-wing air support. Composition is based on the tactical situations, the MAGTFs mission and size, and space limitations within the ARG. The ACE can vary within MAGTFs from a reinforced squadron to one or more Marine Aircraft Wings. For the 31st MEU it is a reinforced squadron.

The ACE is capable of conducting a full range of Marine air operations and is comprised of appropriate Marine Wing assets, which include rotary wing aircraft (helicopters) such as the CH-53E Super Stallion, MV-22B Osprey, UH-1N Huey, and AH-1W Super Cobra, and fixed-wing aircraft (jets) such as the AV-8B Harrier. The MEU also has two C-130 transport planes on standby at Marine Corps Air Station Futenma, Okinawa Japan. Additionally, to ensure self sufficiency, the ACE has air traffic control, aircraft maintenance/support, and aviation logistics/supply.

The final major piece of the MEU is the LCE. For the MEU, it is a Combat Logistics Battalion. The mission of the LCE is to provide combat support, specifically; supply, maintenance, transportation, explosive ordnance disposal, military police, disbursing (pay services), water production and distribution, engineering, medical and dental services, fuel storage and distribution, and other services to the deployed MEU. Relatively small in numbers, usually with less than 300 Marines and Sailors, the LCE has a wide range of capabilities, with each Marine and Sailor contributing his own specialized skill to ensure that the personnel and equipment of the combat arms are ready for, and sustained through, combat or contingency operations.

The MEU is unique in that its air and ground combat elements are combined with combat service support under one commander, the MEU commanding officer. This air-ground task force concept is designed to thoroughly exploit the combat power inherent in air and ground assets by closely integrating them into a single force. It brings what it needs to sustain itself from the sea for the rapid accomplishment of the mission or to pave the way for follow-on forces.

The size and composition of the MEU makes it well suited for amphibious operations; security operations; noncombatant operations or civilians threatened by, or suffering from, violence; and service as mobile training teams. The MEU is an expeditionary force in nature, able to operate in foreign lands without U.S. bases and facilities. It is naval in character, useful in conventional operations in the air and ashore, and is able to operate with U.S. fleets around the world. The MEUs combined arms team bears substantial force and is capable of a high degree of tactical mobility while delivering significant, sustained firepower within an objective area.

We have an Official MarineParents.com Facebook Group for 31st MEU. Click here to join now. Our Official Marine Parents Facebook Groups are run by volunteers who have gone through our training program. To help assure our groups are educational and on-topic, the volunteer Group Leader and volunteer Group Guides are the ones who will post topics in the group. The topics will be either educational or posts for members to have a Place to Connect & Share®. You are welcome to ask your questions or post your comments to any thread posted by the Group Leader and Group Guides.