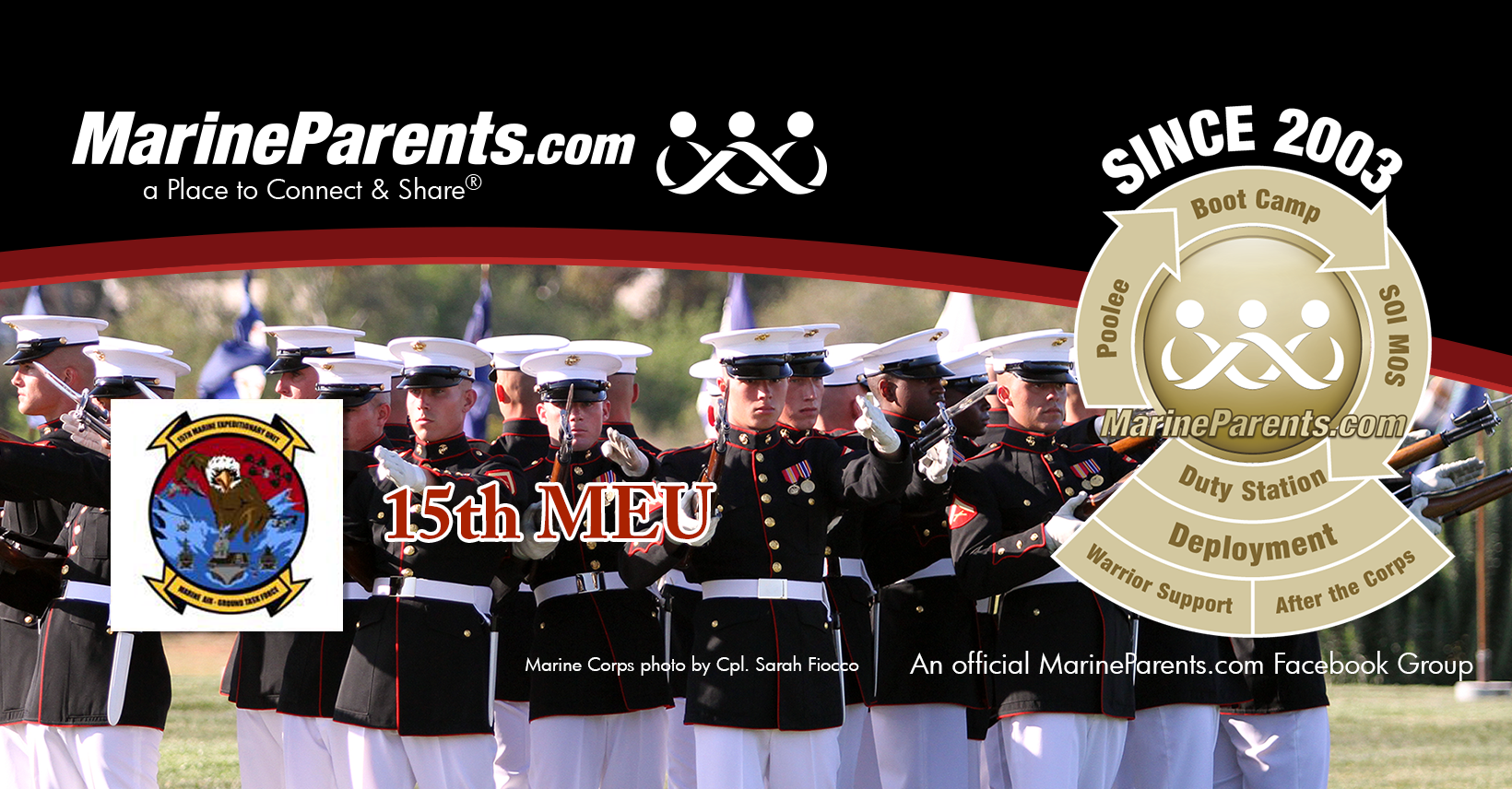 Welcome to the Official MarineParents.com page for 15th MEU.

The Commandant directed the replacement of the title "Headquarters" with "Command Element" in the titles of the MAGTFs in August 1987. The 15th MAU's designation was further changed in February 1988 to the 15th Marine Expeditionary Unit. Both changes were made to more accurately reflect the operational and expeditionary nature of the MAGTF. Before World War II, and in the period between the war and the Vietnam Conflict, Marine units dispatched for overseas service were generally designated as "expeditionary brigades."

Since its activation in July 1987, the 15th MEU has trained to meet its mission in the rotation with the 11th and 13th MEUs to provide a continuous presence in the Western Pacific, Indian Ocean, and Persian Gulf and as a ready MAGTF in the continental United States.

In October 1989, the MEU assisted in relief efforts following the San Francisco earthquake, performing their assigned missions and also taking on several volunteer projects to help the victims of the disaster.

Marines of the 15th MEU relieved the 1st Battalion, 24th Marines (1/24), to continue the evacuation of the Republic of the Philippines in August 1991 after the eruption of Mount Pinatubo six weeks earlier. Assistance lasted over a month as the Marines distributed food and medical supplies, evacuated stranded villagers and provided security to other rescue personnel.

The MEU spearheaded Operation Restore Hope December 9, 1992, to provide humanitarian assistance to the civil war-torn and famine-stricken country of Somalia. After a predawn landing, the Marines secured the capital city of Mogadishu, the international airport and maritime shipping port facilities, as well as the American Embassy, and quickly moved into other inland areas to protect food distribution convoys and patrol the streets to restore order. The MEU pushed into and secured the inland cities of Baidoa and Balidogle and the coastal town of Kismayo in order to establish relief efforts and maintain security. The span of operations for the Battalion Landing Team was over 150 miles (240 km).

We have an Official MarineParents.com Facebook Group for 15th MEU. Click here to join now. Our Official Marine Parents Facebook Groups are run by volunteers who have gone through our training program. To help assure our groups are educational and on-topic, the volunteer Group Leader and volunteer Group Guides are the ones who will post topics in the group. The topics will be either educational or posts for members to have a Place to Connect & Share®. You are welcome to ask your questions or post your comments to any thread posted by the Group Leader and Group Guides.