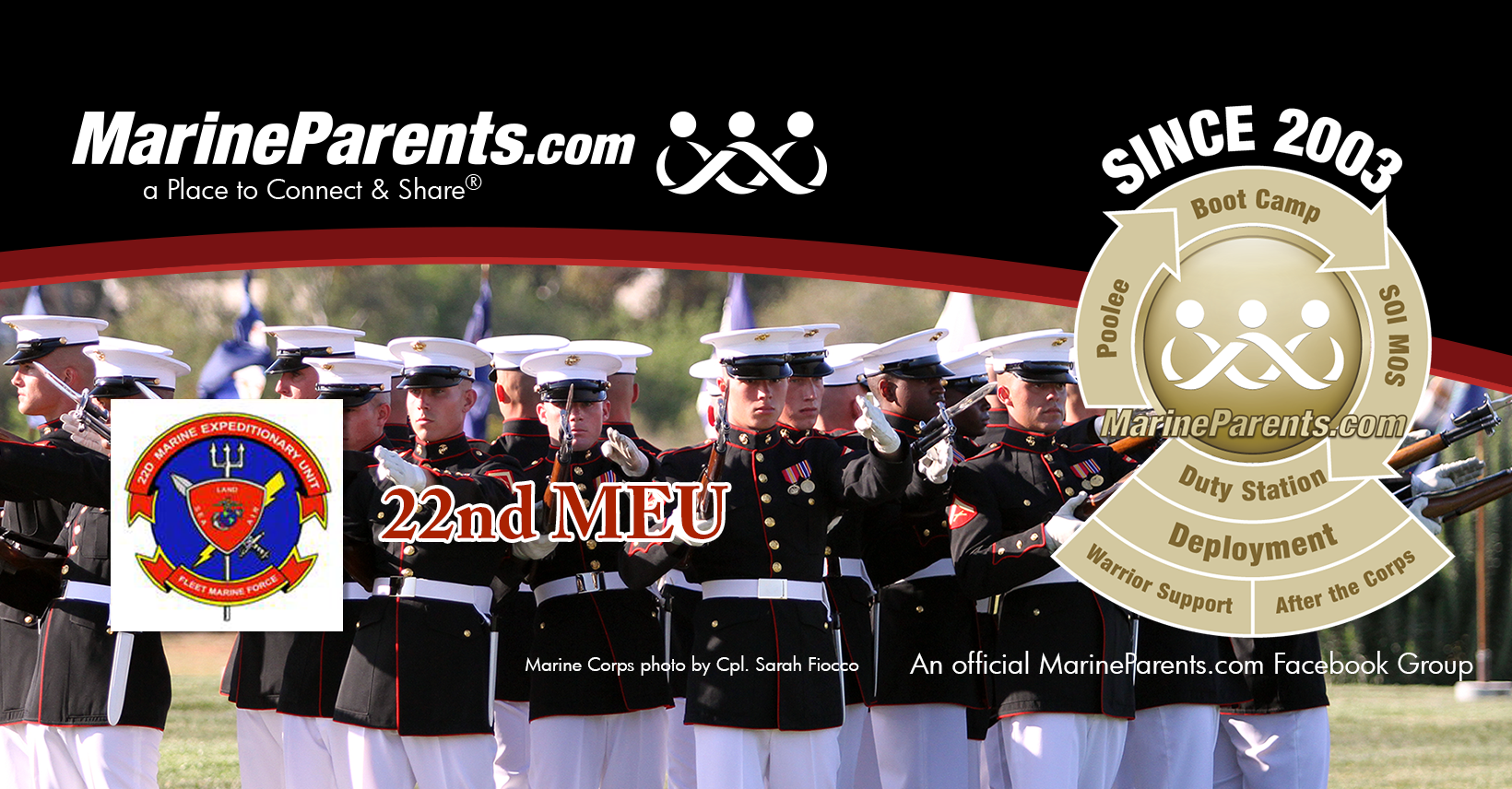 Welcome to the Official MarineParents.com page for 22nd MEU.

The MEU's activation was the redesignation of the 32nd MAU, a unit that regularly deployed to the Mediterranean and Caribbean regions for more than 20 years. On its final deployment, the MAU evacuated the Palestine Liberation Organization from Beirut, and was the first American unit to serve in the multi-national peace-keeping force in Lebanon.

On 22nd MAU’s maiden deployment, it again visited Beirut where the Marines and Sailors served until May 1983, and began preparing for a third deployment to Lebanon upon its return to the United States. On Oct. 18, 1983, the MAU departed the United States, and less than two days into its trans-Atlantic voyage it was diverted to the southern Caribbean.

On Oct. 25, 1983, the MAU participated in Operation URGENT FURY, the invasion of the island of Grenada, which was at that time, the largest U.S. military operation since the Vietnam War. The 22nd MAU conducted numerous helicopter and surface landings over three days and occupied 75 percent of the island; though the Marines constituted less than 20 percent of the total invasion force.

By Nov. 2, of that same year, the unit transited to Beirut where it landed later that month. The MAU remained ashore until late February of 1984, when the mission drew to a close, and evacuated hundreds of American citizens from the country.

Throughout the rest of the 1980s, the 22nd MAU deployed on a rotation basis with the 24th and 26th MAUs, participating in numerous contingency operations and exercises. In 1986, the 22nd MAU was the third unit to deploy with the 'Special Operations Capable' designation. On Feb. 5, 1988, the word 'Amphibious' was replaced with 'Expeditionary' to reflect the Marine Corps' changing role in national defense and theater security.

In May 1990, the 22nd MEU arrived off the coast of civil war torn Liberia in western Africa. The unit remained at sea until Aug. 2 which the Marines went ashore to reinforce the U.S. Embassy in Monrovia and evacuated U.S. citizens and designated third-country nationals. The MEU evacuated more than 1,600 civilians over the course of the next several weeks, until the 26th MEU arrived to provide relief.

We have an Official MarineParents.com Facebook Group for 22nd MEU. Click here to join now. Our Official Marine Parents Facebook Groups are run by volunteers who have gone through our training program. To help assure our groups are educational and on-topic, the volunteer Group Leader and volunteer Group Guides are the ones who will post topics in the group. The topics will be either educational or posts for members to have a Place to Connect & Share®. You are welcome to ask your questions or post your comments to any thread posted by the Group Leader and Group Guides.