History of the Marine Corps from MarineParents.com

Historically, the United States Marine Corps has achieved fame in several campaigns, as referenced in the first line of the Marine Corps Hymn: "From the halls of Montezuma to the shores of Tripoli". In the early 19th century, First Lieutenant Presley O'Bannon led a group of seven Marines and several hundred Egyptian Mameluke soldiers in deposing the dictator of Tripoli. Separately, the Marines took part in the Mexican-American War (1846-1848) and assaulted the Castillo de Chapultepec, or the Castle of Chapultepec, which overlooked Mexico City. The Marines were placed on guard duty at the Mexican Presidential Palace, "The Halls of Montezuma."

After these early 19th-century engagements, the Marine Corps occupied a small role in American military history. They saw little significant action in the American Civil War, but later become prominent due to their deployment in small wars around the world. During the latter half of the 19th century, the Marines saw action in Korea, Cuba, the Philippines, and China. During the years before and after World War I, the Marines saw action throughout the Caribbean in places such as Haiti and Nicaragua. These actions became known as "The Banana Wars," and the experiences gained in counter-insurgency and guerrilla operations during this period was consolidated into the Small Wars Manual. 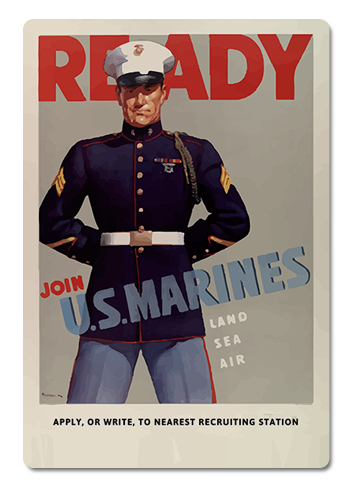 In World War I, the battle-tested, veteran Marines served a central role in the U.S. entry into the conflict, and at the Battle of Belleau Wood, Marine units were in the front, winning the Marines a reputation as the "First to Fight". This battle cemented the reputation of the Marines in modern history. Rallying under the battle cries of "Retreat hell! We just got here!" and "Come on, you sons of bitches, do you want to live forever?", the Marines violently expelled German forces from the area. The Germans referred to the Marines in the battle as "Teufelhunde", literally, "Devil Dogs", a nickname Marines proudly hold to this day.

U.S. Marines raised the American Flag on Iwo Jima on February 23, 1945. In World War II, the Marines played a central role in the Pacific War. The battles of Guadalcanal, Tarawa, Iwo Jima, and Okinawa saw fierce fighting between U.S. Marines and the Japanese Imperial Marines. The war saw the expansion of the Corps from two brigades to two corps with six divisions and five air wings with 132 squadrons. The secrecy afforded by the Navajo code talkers contributed to their success. 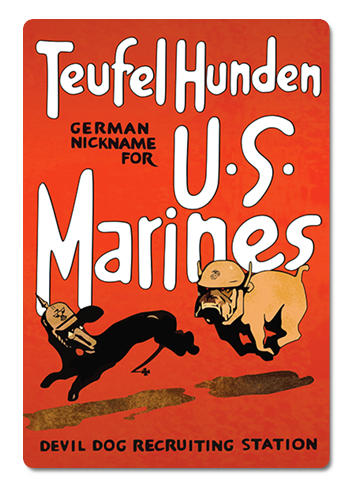 During the Battle of Iwo Jima, the famous photograph of five Marines and one Navy medical corpsman raising the flag was taken. The acts of the Marines during the war secured their reputation, and in honor of them and all Marines who have died in war, the USMC War Memorial was dedicated in 1954.

The Korean War saw the Marines land at Inchon and assault north into North Korea along with the Army. As U.S. forces approached the Yalu River, the People's Republic of China, fearing an incursion by American forces, sent armies over the river to engage American forces within Korea.

At the Battle of Chosin Reservoir, the First Marine Division fought Chinese forces, vastly outnumbered but vastly better equipped and trained. Recovering equipment left by Army forces who had scattered in disordered retreat, the Marines regrouped, assaulted the Chinese, and inflicted heavy casualties during their fighting withdrawal to the coast.

The Marines also played an important role in the Vietnam War at battles such as Da Nang, Hue City, and Khe San. Marines were among the first troops deployed to Vietnam, as well as the last to leave during the evacuation of the American embassy in Saigon.

After Vietnam, Marines served in a number of important events and places. In 1983, a Marine barracks in Lebanon was bombed, causing the highest peacetime losses to the Corps and leading to the American withdrawal from Lebanon. Marines were also responsible for liberating Kuwait during the Persian Gulf War, as the Army made an attack to the west directly into Iraq. In 1996, Marines performed a successful mission in Bosnia, rescuing Captain Scott O'Grady, a downed Air Force fighter pilot, in what is called a TRAP (Tactical Rescue of Aircraft and Personnel).

Post 9/11, the Marines have served prominently in both Iraq and Afghanistan. The Marines played a key role in the invasion of Iraq on March 20, 2003 through the fall of Baghdad on April 9th, but that proved to be just the beginning of a more than eight year Marine presence in that country. Marines served bravely in many battles in those years, such as the first and second battles of Fallujah, and the battle of An Nasiriyah. In Afghanistan, Marines have been instrumental in battling Taliban and other terrorist forces for over a decade, and will continue to do so through at least 2014.